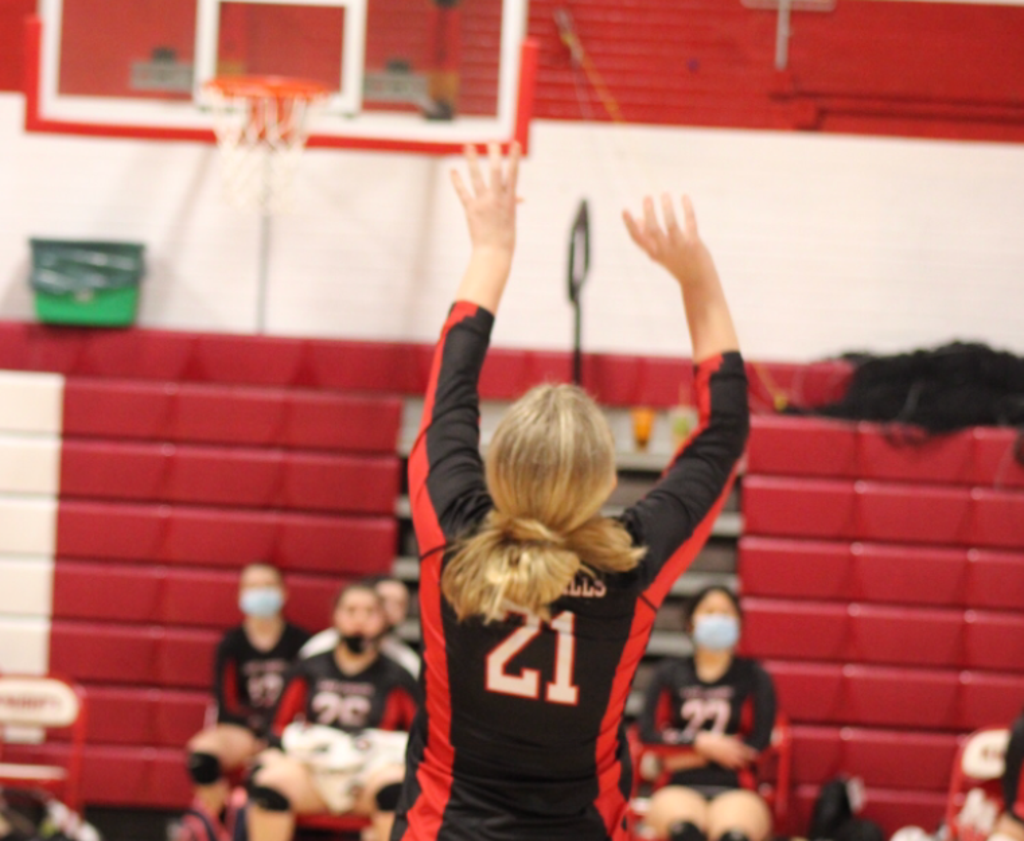 The photo was taken by Jessica Gordimer (ig: @jtg.creations)

Last year, the Morris Hills girls volleyball team had an up-and-down season, ultimately ending with a defeat in the first round of the NJSIAA North 1, Group 3 tournament.

Senior setter/outside hitter Ryan Grow will look to be a key in helping the Scarlet Knights to grasp a sectional title.

I sat down with Ryan to talk about her visions for the Morris Hills Scarlet Knights.

“I go to Morris Hills High School and have lived in Rockaway for most of my life,” Grow said, “I will be graduating in 2022 and am really excited to see where it takes me. I have 2 siblings as well as 2 dogs, George and Truman, who I love very much.”

Ryan has been playing volleyball competitively since her freshman year, but it was her father who really got her into the sport. It all started when she and her father were playing in their backyard and he mentioned a program to Ryan. From there, the rest was history.

The Senior plays her club volleyball at Xtreme Volleyball Academy, where she is a setter for her team. While she is primarily a setter, Ryan also loves to play at the right-side hitter position. Grow is a versatile player, standing at 5’7” with a vertical of 17”. If you want to question that, look at her stats from a shortened season last year! She led her team with 91 assists, while also adding 21 kills to her ledger.

“I think a big thing will be communication from people on and off the court,” Grow said.

Ryan is also very excited to see how some up-and-comers will perform in the fall.

“I am excited to see Sophia Lopez and Stephanie Haessig this year,” she said, “They both play middle and were two of the younger players on Varsity last year.”

Lopez is now a Junior, while Haessig is a Sophomore for the Scarlet Knights. This gives Coach Hobson a couple of strong returning swingers up front.

Ryan Grow is looking to play volleyball after high school and is in the process of visiting colleges. She has visited Rhode Island, Stone Hill and New Haven, so far.

Playing in the NJAC, there are lots of strong players that teams face. Last season, Grow mentioned that Mount Olive setter/opposite Adriana

Szurnicki was the toughest competitor she had faced. But in this case, both Szurnicki and Grow played on the same club team—playing the same position.

“I feel like it’s always harder to play against teammates since you both know what the other likes doing, especially if you both play the same position,” Grow said.

“This most recent season we ran a 6-2,” Grow said, “I had an easy time with the rotations as well as the setting options since we had been running them over a lot in practice.”

For those who don’t know, a 6-2 is an offense that is run when a team has 2 setters on the floor at the same time. In comparison to a 5-1, when there is only 1 primary setter.

Grow had some glowing words about her Morris Hills volleyball coach, Coach Hobson.

“She [Hobson] brings the energy and is such a positive and optimistic person,” Ryan said, “She has definitely been a big help since freshman year and I appreciate the amount of effort and dedication she has for the program.”

Grow loves playing volleyball in almost any setting, but she definitely prefers playing on a hardcourt.

“I think it’s easier to move around without the sun or sand in your face,” she noted.

Ryan Grow finished last season leading her team in assists, while adding in a strong attack and aggressive serve. The setter floated in 21 service aces, which was second most on her Morris Hills team.

Playing in a very competitive division in the NJAC, it will be very extremely interesting to see how Morris Hills competes. One thing is for sure—Ryan Grow will make an impact for the Scarlet Knights in more ways than one!

Go to NJ Power Ranking to keep up with all the NJ high school volleyball action.