Katie Webber Emerging as Yet Another Leader for Mendham Volleyball 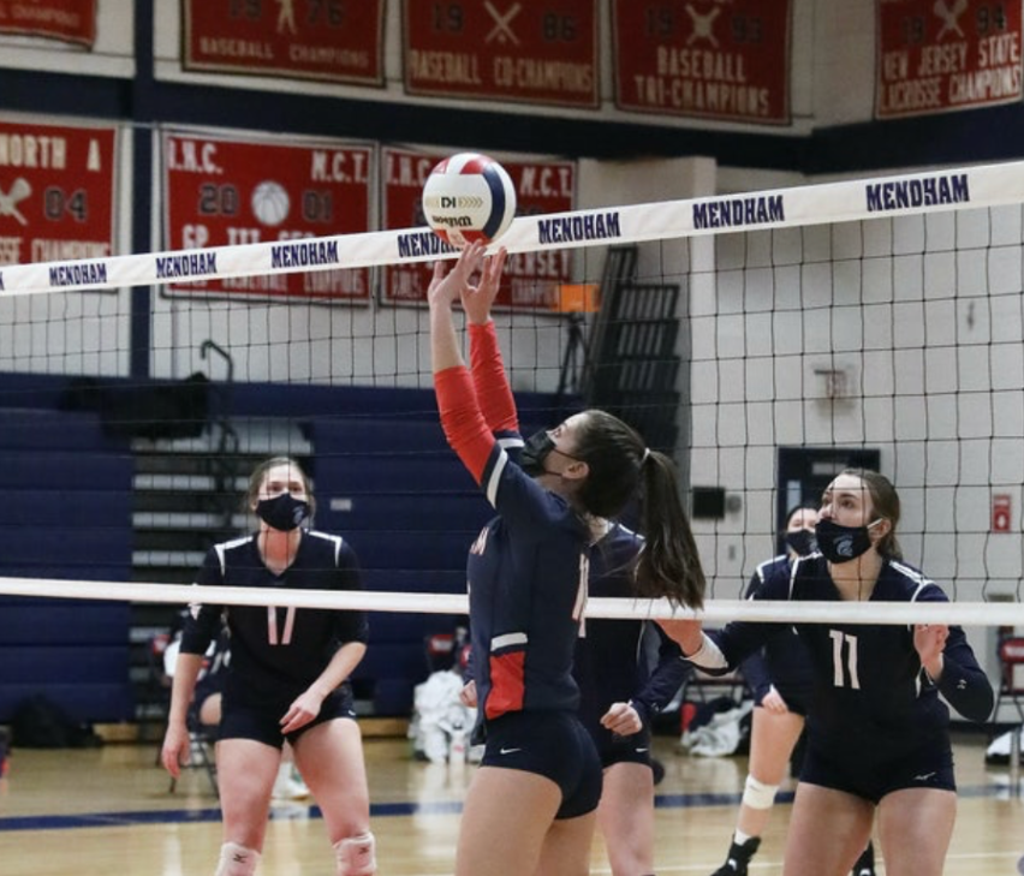 The Mendham girls volleyball team had yet another memorable season, finishing the spring 2021 slate with a 12-4 record. This incredible squad battled all season in the toughest division in the NJAC, which included some of the best teams in New Jersey. The Minutewomen swept their way through the NJSIAA North 2, Group 3 tournament, which ended with a win at Chatham.

Mendham will be retaining two strong hitters—Poppy Skjonnemand and Annibelle Ernst. What would a hitter do without a reliable setter? Good for you to ask that question, because I spoke to Mendham rising Senior setter Katie Webber to talk about her expectations for the Minutewomen this fall, and much more!

“My name is Katie Webber, I live in Chester NJ and I attend Mendham High School. I am a part of the graduating class of 2022,” she said, “My family consists of me, my two younger siblings – my brother Ryan and my sister Sarah. They also attend Mendham High School and they are both members of the upcoming sophomore class. Other members of my family obviously include my parents, my mom Karen and my dad Bruce. Of course, I cannot forget my two dogs, Gia and Shiloh.”

For Webber, volleyball entered her life during her middle school years. And it is only fitting that it was one of her physical education teachers that motivated Katie to keep playing volleyball—it was only up from there.

“Chester Middle School did not have an official volleyball team, but the intramural volleyball program was just as fun. It was every Tuesday, Wednesday and Thursday over the course of a couple months. As soon as I started, I knew this was the sport I wanted to pursue,” Katie added, “Ms. Dempsy, one of the gym teachers, ran the program and she was my biggest inspiration and favorite person of all time. Her energy on the court and her encouragement towards everyone made me develop the love for the sport. Being just in sixth grade and seeing all of the older kids play so well made me want to improve more and more. When the middle school intramural volleyball season ended, I took up some small group practices so I could improve my skills.”

Katie Webber stands 5’6” tall and is a setter and a libero/defensive specialist. She plays her club volleyball at Garden State Elite Volleyball Club. She loves the trust and importance of being a libero, as she mentioned that position was her favorite of all.

Mendham will be losing a handful of Seniors who have graduated, but Webber is still extremely confident in the Mendham returning players to set a foundation for the newcomers.

“I think we will be a strong team in the upcoming season and I believe that our best days are ahead of us. I think with some of our players playing completely different positions compared to club this past season, it forced the team to communicate 10x more and probed unexpected connections to be made,” the Senior said, “Speaking for myself, even though the season was shortened it was one of the best and most fun volleyball seasons I have ever experienced. I am hoping we have a lot of returning players, considering we only had four of our players graduate this past year. I think the key to success will be our communication and dedication to the game.”

The Minutewomen have a lot of valuable players returning for the fall season, and Katie loves the fact that the whole team is so mentally and physically strong.

“You can see the drive and passion in everyone’s soul and I can confidently state that there is nothing negative I could say about anyone who plays on the Mendham girls volleyball team. They are truly a great group of girls and I am beyond honored to play beside each and every one of them,” Webber said.

To no one’s surprise, Katie Webber thinks incredibly highly of Poppy Skjonnemand. And why would anyone think anything otherwise.

Katie said, “She [Poppy] is one of the best players I have ever played with and is the definition of making your presence known on the court. Whether it’s her loud yelling that draws your attention, her funky hair styles or her ability to hit the ball with both insane power and accuracy whenever she is on the court, you will know her name by the end of the game.”

But it is not limited to Skjonnemand—”Ania Trzesniowski is another stand-out player for the upcoming season. During the last season, she played both outside and right-side. Her ability to pass also shines through in her gameplay as last year she was one of the only players who played all six rotations. She has incredible power in her swing and knows how to make the game fun,” Webber said.

Another player to look out for next season is fellow Mendham setter Chloe Czop.

“Despite not having a lot of experience setting, you would not be able to tell when watching her play. Being both new setters at the varsity level, Chloe and I bonded a lot over the past season over our fear of setting in a varsity game since we both had not set in over a year prior to the season. You can easily tell that she played libero for her club team with her insane ability to track down and pass any ball with ease. If you watch any Mendham volleyball game, you may find Chloe on the floor a lot, but not to worry, she will get right back up before you can blink,” Katie noted.

Webber does plan to play volleyball after high school, at the club level. She did note that if she did get the opportunity to be a varsity-level athlete at college, it would definitely be considered.

“It is such a huge part of my life that I am not ready to give up after high school,” Katie said.

In the NJAC, there are lots of great players. Webber, when asked about who the toughest player was that she faced, she said it was MacKenzie Wiggins of Sparta.

“That girl [Wiggins] is everywhere on the court and can do everything. Her strength in the front row is no different from her strength in the back row,” the Mendham setter said. However, when it comes to toughest team overall that Webber faced, she gave that honor to Roxbury.

Mendham is another team that runs a 6-2 offense. With Webber being relatively new to setting, it definitely was a learning curve.

She said, “At first, it was a little difficult to learn playing 6-2 and it was slightly hard to adapt to it, but I quickly got the hang of it. Throughout the season my teammates were so patient and understanding and they helped me improve immensely along the way. Some of them knew more about setting than me and would encourage me to try things out of my comfort zone,” Katie added, “Without the encouragement from my teammates, I don’t think I would have had the confidence to set game after game. Being a fairly new setter, I am constantly talking to the hitters about what I should and shouldn’t be doing. Their consistent and honest feedback helped me so much during the season.”

Playing at Mendham, Webber plays for Coach Racz. She loves Racz’s composure along with his sense of humor, which makes it a lot easier to relax and keep the Mendham volleyball team upbeat.

Katie Webber plays her club volleyball at Garden State Elite Volleyball Club (GSEVC) and she absolutely loves playing in that environment—except when Coach Khaled runs practice! For those who don’t know, Khaled runs some hard-core practices, but definitely keeps the players moving.

“I have become so close with a lot of the coaches during the time I have played there and they all are like friends to me. I find it so funny that when I mention to people that play at other clubs that I casually text my coaches they are so weirded out by it. GSEVC is a club experience like no other. Some of my favorite memories of all time were made with my coaches or at tournaments where everyone is sitting around almost forced to bond with one another,” Webber said.

Webber is excited about what is in store for the Mendham Minutewomen this fall and we will be checking in on Mendham’s progress down the road!