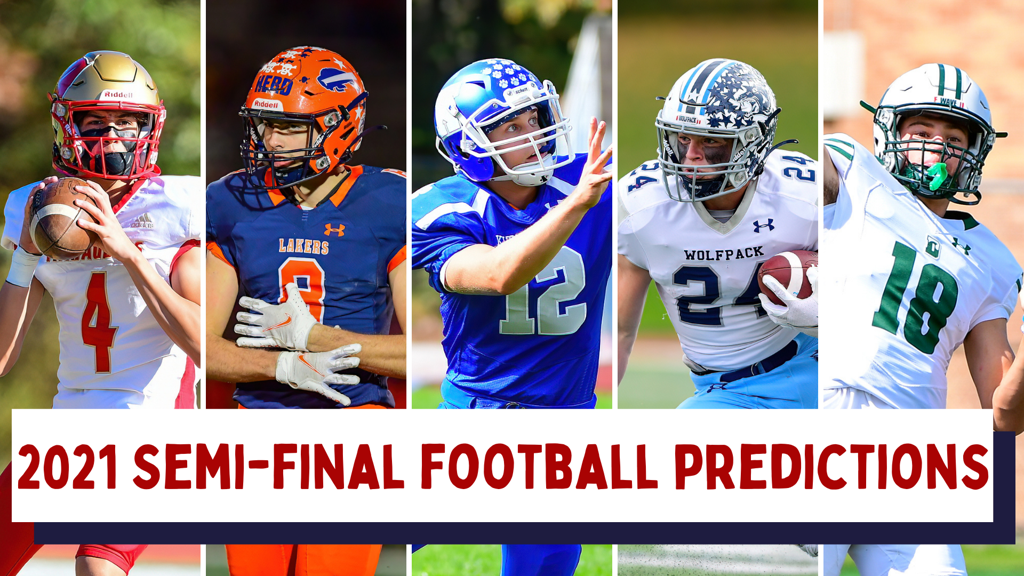 Brian Kenney: Red Bank is a powerhouse and tough to beat at home. I think Dean Denobile will throw for a score and run for another while Max Ycaza runs for over 125 yards and another score for the Crusaders, but they will fall short in this one. PICK: RBC 40-26
George Muha:  I know everyone thinks RBC is going to slaughter MC but not me.  I think RB Max Ycaza is going to grind out tough yards while the Crusaders’ playmakers come up big.  I think Coach Hack is going to be so hyped, it’ll be impossible for this team to come out flat.  For that reason I’m going with the Crusaders in the upset!  PICK: MC 45-40

Brian Kenney: The Kitts played awesome last week and they will play well again this week, with the offensive line leading the charge for Luke Brex to amass over 150 yards and 2 scores on offense. But I think the Heights will win this one in the final minutes in front of the hometown fans. PICK: HH 24-21
George Muha:  Kittatinny’s Luke Brex is a complete workhorse and will certainly be a mouthful!  And the Cougars line will be a lot to handle for the Heights.  But the Aviators have been flying high all season and despite it being a battle, Hackbrouck will advance.  PICK:  HH 32-31

Brian Kenney: Go Hornets !
George Muha:  The Hornets tough regular season schedule is paying dividends in the postseason.  Winning playoff games on the road is no easy task but give me a healthy Mike Filippone in a big game and I’ll take that every time.  Rispoli will have two sacks and a turnover for those fantasy owners that have HP’s defense.  PICK:  HP 28-24

Brian Kenney: Old Tappan won a baseball game 2-0 last week, and their offense will put more points on the board this week, but not enough. The Pack’s Stefano Montella and offensive line want to see if he can run for a mile this Friday. (That’s 1,760 yards in case you were wondering). That won’t happen, but they will sure try. PICK: WMC 39-26
George Muha:  I’ll admit last week's upset loss prediction at the hands of Summit was my attempt to fire up the Wolves.  But it’s the playoffs and my dumb prediction against them shouldn’t be their motivation.  Plus, I can’t predict this week without paying homage to Stephano Montella’s monster performance.  I hope Alabama, Ohio State, etc are paying attention!  No way OT will have an answer for Montella and the Wolfpack this week.  PICK:  Wolves 35-24

Brian Kenney: Oh man the Highlanders are good. Undefeated, destroying teams, and at home. Well, as Hanover Park proved, undefeated teams can go down, it’s the playoffs, son. Hunter Perez and Jack Clemente will combine for over 300 yards on the ground and 4 scores, while Adam DeCristofaro and Anthony Moscatella will rack up a total of 25 tackles between them with at least one forced fumble. Dan “Bullseye” Barra makes a 39 yard kick in this one that ends up being the difference in favor of the Marauders. PICK: MO 45-42
George Muha:  Northern Highlands is the number 1 team I’ve seen all season.  They are just the total package.  However, Mount Olive upset the 2nd and 3rd best team I’ve seen all season!  This has the makings of an epic game but I’m doubling down on the Marauder D and Jumpin’ Jack Clemente to show the world that the Red & Gold are the team to beat!  PICK:  MO 38-35

Brian Kenney: The Herd has their work cut out for them in this one. They need to figure out how to stop Rashawn Marshall, who busted for 178 yards and 2 scores the last time the teams played in a Herd loss. I think they will slow him down and play well, but I think Weequahic will escape with the victory in a close one. PICK: Weequahic 21-17
George Muha:  Weequahic has some big dudes and real athletes on their team.  While the Indian’s speed got the better of the Herd two weeks ago, Coach Fusco’s mastery of making adjustments will pay dividends when they get a second look at them this week.  PICK:  Herd 34-33

Brian Kenney: This game is going to be epic. Last week the Bombers’ Hunter VanZant and Nate Prater combined for 5 TDs, showing again why the Boots’ O-Line deserve rolexes at the end of the year (ok, maybe some gift cards to Chipotle). But they just faced the Panthers last month and Cedar Grove had a huge fourth quarter to win the game 36-21. Patch “Adams” McCarthy and Nick Coletta combined for over 230 yards in that one, but it was the Grove’s defense that really slowed down the Boots’ ground game. The rain won’t do much to slow down the offenses, but it might hurt the Panthers more as they do throw. Either way it’s going to be up to the Bombers defense to come through, and I think they will be in a barn burner. PICK: Boots 33-28
George Muha:  I guarantee Coach Gallagher has every inch of this game mapped out in his game plan.  It’s the playoffs and no team executes better, hits harder and gets more fired up than the Bryan Gallagher coached Bombers.  It’s going to be epic but the black and red will finish on top.  PICK:  Bombers 35-26

Brian Kenney: J-Town played awesome last week and will bring it again versus the Braves, but Newton is just too good. That being said, Jefferson’s Travis Osterhout will be everyone's favorite in this game, racking up 20 tackles. But I think the Braves’ offensive line will do some damage and I see Thaylor Sibblies and company totaling over 300 yards on the ground in this one. PICK: Newton 34-21
George Muha:  I loved how J-town played last week!  Peter Delaportas throws lasers and is a super star!  Look for the Falcons to come into this game with a ton of confidence.  Don’t anticipate the normal schilacking by the Braves in this one.  Put your money on Newton but it won’t be won till the final whistle.  PICK:  Newts 30-29

Brian Kenney: River Dell is on a tear. I don’t know, this is going to be a tough one for the Spartans. Austen Frattura was near perfect last week at QB, but the weather conditions will be less than ideal on Friday. I am going to go with Sparta, but I can see the Dell winning this one. Look for Justin Smith to run for a buck seventy and three scores while Parker Williamson gets a big sack and forces a fumble for Sparta. PICK: Sparta 27-21
George Muha:  River Dell will be showing up to play in this one but Vegas says to take Sparta with the points (3) and take the over (75).  Expect Austen Frattura to be a fantasy owner's dream with monster yardage and scoring-wise.  PICK:  Spartas 34-30

Brian Kenney: St. Augustine is just good. Plain and simple. The Green Wave will battle until the end and leave it all on the field, but I think Nasir Hill will make big plays on both sides of the ball for Saint A as they win a close one at home. I think Aidan Papantonis will do his thing and run for at least 1 score, while Robert Russo deals with the elements and throws and runs for another two scores, but in the end the Auggies will prevail. PICK: SA 35-27
George Muha:  Delbarton’s insane regular season schedule pays big dividends this time of the year.  Robert Russo will score two through the air and one by his feet as the Wave advances.  PICK:  Green Wave 35-28