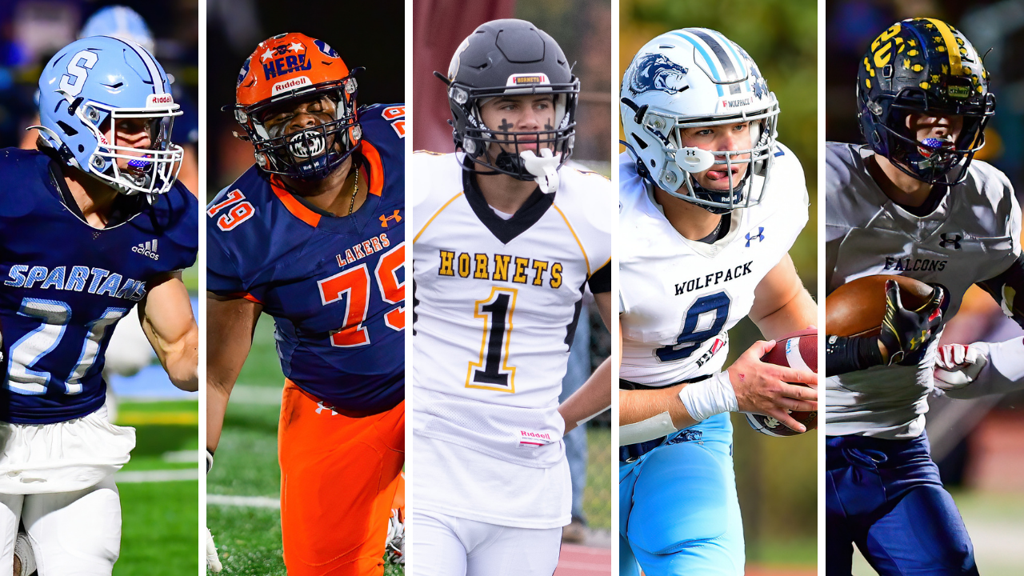 Brian Kenney:  A buddy of mine made a great observation, look at all these teams from the West Essex Football league playing for State Championships. Caldwell, West Essex, Cedar Grove, and Hanover Park (who used to be in that league until a couple years ago).  It’s like the SEC of pee-wee football conferences in New Jersey. That is not to take away from the Herd, who are on fire at the right time and are having a great season, hitting a high mark with last week’s revenge win against Weequahic, a team that beat them by two touchdowns a few weeks ago. But the Panthers only loss came to Caldwell and they are peaking as well. Last week they dominated a great Boonton team, and how about this kid Patch “Adams” McCarthy. He is a tackle machine, it’s crazy. I think the Grove will win a close one, but there is no question the Herd will leave it all on the field. That Christ-to-McLaughlin connection will connect at least twice in this one, but the Lakers will come up a little short. PICK: Grove 28-24
George Muha:  I have two words for you, Ryan-McLaughlin.  The 6-5 receiver/d-back is a playmaker and playmakers help win championships.  I have two more words for you, Justin-Hernando.  That kid is a full on demon and his 1st down run last week coming off an injury was Wilt Chamberlin-esk.  The Herd will need to play near perfect and then need some luck to beat Cedar Grove as this team is stacked.  I am hoping I am wrong but this will go to the final whistle with the Panthers advancing to MetLife.  PICK:  CG 34-30

Brian Kenney: Go Hornets!
George Muha:  In 1990, Hanover Park adopted the slogan “All Business”.  That was the only year Hanover Park ever won a sectional championship.  This year, this team adopted the slogan “All Business II”.  Openly, I felt that was a little sacrilege because that 1990 team was so dominant I still feel to this day we (I was on the look team for the Hornets that year) would have beaten Randolph and Montclair - the two teams that played in the famous "Miracle in Montclair" game (even though every time I say that I get hate mail from my Randolph friends).  Just look at the college careers those 1990 Hornet players had at schools like Fordham, Delaware, U-Mass, William Paterson, Montclair State, Temple, FDU, etc.  Okay, I am going to get myself a little off-track.  The point I am making, when this 2021 group adopted All Business II, I said to myself you better be able to back that up if you are going to put something out there like that.  And boy did this team rise to the occasion!  I couldn’t be more proud of my Hornets dealing with all kinds of injuries and adversity, and getting to Sectional Finals as the 8-seed.  No more second guessing yourselves boys, let’s do this thing.  I am picking Caldwell to win just like everyone else in the state to add on to the bulletin board in the locker room for you guys.  But I am praying you make me eat this prediction.  PICK:  Caldwell 45-40

Brian Kenney: This is going to be one of the best games of the weekend. I think both teams expected to be playing for a State Championship since the start of the season. While it will be a battle to the final minutes, my money is on the Pack. Look for Donnie Long to score at least once for West Essex, but I think the Pack’s Defense will keep the West Essex running and passing game in check (look for Trevor Hillier and Noah Turner to combine for 20 tackles in this one).  The Pack’s offensive line and defense will again get the job done and step up in big spots in this one. I see local Pack hero Stefano Montella running for a buck fifty and two scores (while he probably racks up 12 tackles on defense as well), but I think Pack QB Hillier will make some plays at the helm to open up the running game more in this one. PICK: WMC 34-28
George Muha:  West Essex receiver/d-back Chris Corbo is such a great player and honestly has been a lot of fun to watch since his sophomore year.  He’s going to be a mouthful for the Wolves.  But with the way Montella, Brady and the O-line have been playing for West Morris I just cannot see anyone slowing that offense down.  The only thing I’d be worried about is West Essex is as masterful at grinding out the clock and keeping opposing offenses off the field so it’ll come down to the Wolfpack D.  But I think they get it done.  PICK:  ‘Pack 36-24

Brian Kenney: Well, I have to say I figured Sparta would be playing for yet another chip, and here we are. But undefeated Cranford poses a huge challenge for the Spartans. Specifically, how the heck are they gonna stop Colin Murray? Kid ran for over 200 yards and 2 TDs on 9, yes 9, carries. All that being said, I think the Spartan D will step up and keep the Panthers’ offense in check. Look for Billy Quinn and Paul Gennat to combine for 20 tackles and a forced turnover while Austen Frattura throws for 200 yards and rushed for another 40 while leading Sparta on at least 5 scoring drives. Josh Brancy will run for over 100 yards and score once on the ground and once on a reception. PICK: Sparta 35-33
George Muha:  No team has gotten stronger as the season went on than the Sparta Spartans.  That's what great teams do.  Everyone's picking Cranford to demolish Sparta.  I honestly don't think people are paying attention.   I think Sparta's insane schedule (7 out of their nine opponents made it to the playoffs and two of those opponents are playing in their respective sectional final) is going to pay big dividends this week and next when they play in MetLife.  PICK:  Sparta 50-42

Brian Kenney: J-Town has proved me wrong several times this year, none more so than last week when I beat powerhouse Newton. Falcon transfer QB Peter Delaportas has proven worth his senior contract. Credit to the coaches and players for bringing it all together now. Rutherford has won 9 in a row, however, and they fully expect to roll J-Town on Saturday. I don’t think it will happen, but make no mistake, Cole Goumas and Pat Cerulli are going to rack up some yards on the ground and each score once for Rutherford, while Matt Scheibe records about 10 tackles on defense for them. However, I think that Delaportas and Jason Eisele will generate enough offense to lead the Falcons to victory in this one. The Falcons’ QB will throw for over 250 yards and 3 TDs, while Eisele runs for a buck ten and two scores.. Look for Travis Osterhout to catch one of those TD passes, but more importantly rack up 15 tackles and a sack of defense. Dylan Patscher and Dale Jenkins will combine for 18 tackles as well for the Falcons, whose defense will bend, but not break, in pulling off the second biggest upset of the weekend. PICK: J-Town 42-37
George Muha:  I don’t need to be the one who says, “I told you so” but I did tell you week-in and week-out that Jefferson has a good team.  So, I told you so.  That was a real-deal football team that showed up against Newton last week and I can’t remember a better defensive performance than the Falcons delivered.  Winning against a very good Rutherford on the road in the Sectional Final won’t be easy.  But if J-town plays like they did last week, the NY Giants could be on their schedule and they’d advance.  PICK:  Falcons 28-23