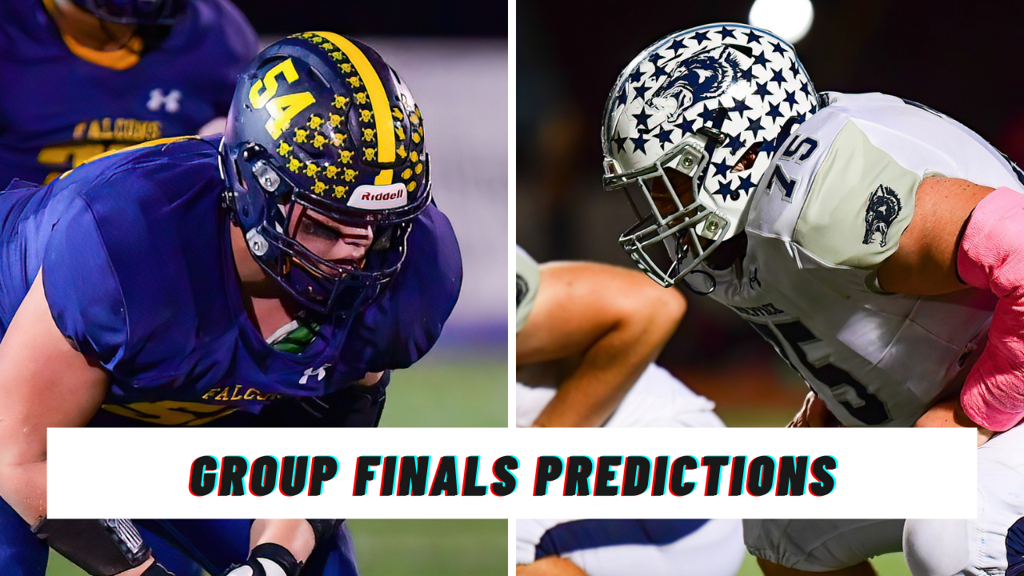 Brian Kenney: Caldwell is looking to make history. Jefferson wants nothing more to change it. Are the Chiefs like the undefeated Patriots who got shocked by the Giants in 2012?! There is no question the Chiefs are full of confidence, and they should be. Luke Kurzum and class act Pat Capozzoli have led this offense all year, and the offensive line is fast and strong. They are going to put up at least 20 something points. And their defense, led by Julian Casale, who is a sophomore by the way, is fantastic. That is why is it going to be all the more shocking when the Falcons pull off the upset of the year in the final game of the season. Look for Jason Eisele to grind out 100 yards on the ground, but it will be Eric Garv who picks up where Delaportas left off, throwing for 3 scores and over 200 yards in this barn burner. On defense the Falcons will play like animals, with team defensive MVP Travis Osterhout racking up 20 tackles and Josh Danyus getting 2 sacks and another 10 tackles.  PICK: Falcons 27-24
George Muha:  If you look at Caldwell, they look rather unstoppable.  They are outscoring teams about 40-7 all season long.  They literally look like they are destined for this to be their year.  But here is my case as to why I am picking J-town to win.  First off, Hawthorne, Newton and Rutherford (all of Jefferson’s playoff opponents) all outscored their opponents by a big differential before they faced Jefferson’s defense.  Secondly, this team just win it’s sectional title after losing their D1 quarterback to injury early in the game.  Football is the ultimate team sport and if your team can pull it together and win 28-7 after losing your star QB in a game like that, you know there is nothing this group can’t do.  And the third reason why I am doubling down on the Falcons is coach Jerry Venturino is a winner.  He won a sectional title as a high school QB at Hopatcong QB and a ECAC Championship as a college QB at Moravian - all the while being 5-6, 150-pounds soaking wet.  Put this guy in a situation where he has a chance to win and watch out.  I know this may seem way too homery of a pick but I am the guy that was saying to buy the Falcons when everyone else was saying sell and look where they are now.  PICK:  J-town 28-14

Brian Kenney: First of all I want to apologize for calling the Cranford team the “Panthers” as they are the “Cougars.” To be fair, those animals are very similar. Second - Cougar Colin Murray is totally unstoppable. The kid ran for 2,379 yards and 33 TDs this year. Against Sparta, they fed him the rock 40 times and he had 334 yards and 2 TDs. He’s like the Terminator, when he scores he turns to the end zone and says “I’ll be back.” Is this kid human? Did we check to see if he is an android or maybe a superhero? Crazy. Let’s not sleep on their defense either, especially Will Gallagher who had 3 interceptions last week.  That being said, I think that the Pack’s defense will step up to the huge challenge that is the Cougars’ offensive line and Mr. Murray. Look for Noah Turner to lead the team again in tackles this week with 20, while Trevor Hillier adds another ten. Trevor will account for 3 scores in the air and on the ground, and I think Stefano Montella will rush for a hard-fought 120 yards and 2 scores behind the tough offensive line, including beast Nick Muha, in yet another upset. PICK: WMC 24-22
George Muha:  Big time players, play big time football in big time games.  Yes, I am talking about Stefano Montella.  But I am also talking about Trevor Hillier, and Ryan Brady, Noah Turner and everyone else on this talented team of big time players.  The Wolves already have their sectional title ring so all the pressure is off them.  When this team plays loose, watch out.  I predict West Morris runs for over 300-yards on the ground.  And not because their backs are awesome, which they are.  But in this game, the five guys up front in Groeling, Frayne, Cope, Leonhardt and Muha will be so fired up Brian Kenney and George Muha would combine for over 300-yards - something I assure you both of us would be ready to do if Coach Hennelly asked to do.  PICK:  Pack 32-27