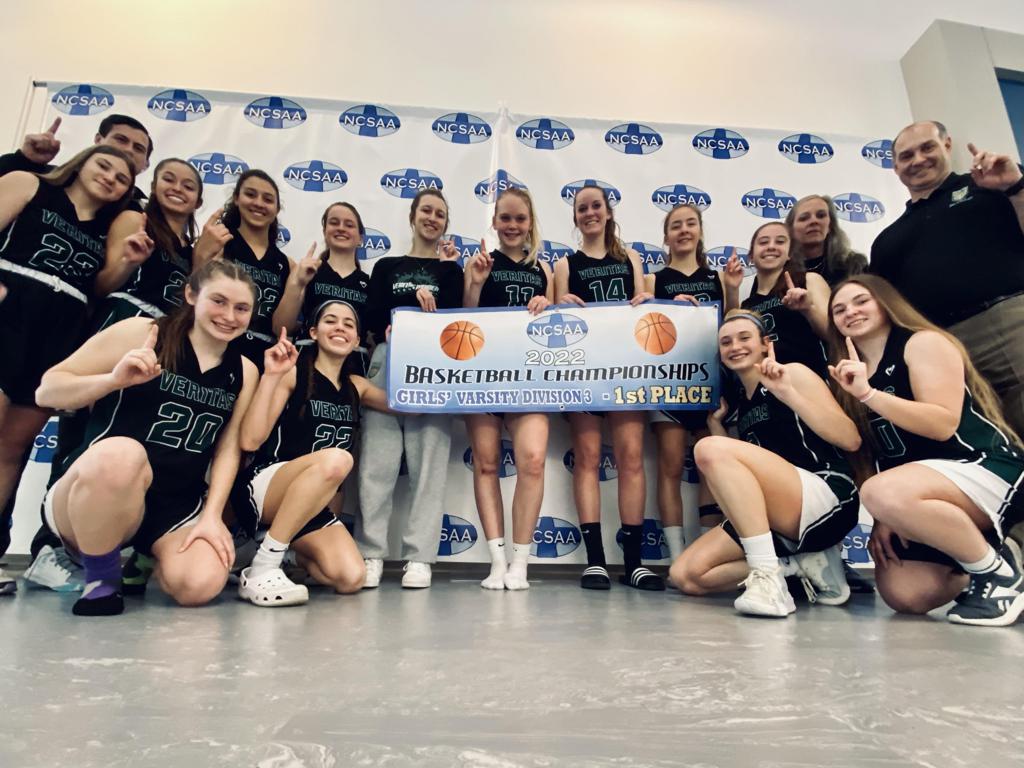 SPARTA, N.J. (March 4, 2022) – The Veritas Christian Academy girls basketball program is synonymous with winning, but this March their winning ways reached new heights as they were crowned the Division 3 National Champions at the National Christian School Athletic Association (NCSAA) Tournament in Ohio defeating the HRK Eagles (IL) in the championship game 41-39. It marks the first time that Veritas Christian Academy has won a national title at the annual NCSAA Tournament.

This was the culmination of a memorable season for the Veritas girls team who boasted a 26-7 record including being undefeated in Metro League play and winning the league tournament.

The national championship, however, was not without its challenges. The Veritas team found themselves down 10 early in the fourth quarter, but battled back to take the lead in the final minute. With 2 seconds left on the clock and HRK with the basketball under their basket, senior guard, Charlotte Milanesi, blocked the last second shot to seal the game before being mobbed by her teammates. That play was the capstone of a memorable weekend as Charlotte Milanesi also scored her 2,000th career point just a day earlier in the team’s semifinal victory. First-year head coach, Armand Milanesi, had this to say about his team’s performance this
weekend:

“At the beginning of the season, we made a point about our girls learning to play comfortably when uncomfortable. It is why we play Group 4, Group 3 public schools, which are mostly 40 times larger than our school. Down 10 points with about 7 minutes remaining in a national championship game, against a well-balanced, well-coached team certainly qualifies as being uncomfortable. At a time-out, we talked about clawing back with defense, steals or holding them to one shot, and run-outs for some easier baskets .All game I was very pleased how we were executing in a half-court set but we knew we needed to get out in the open court and push the pace to make up the gap. That is our style. And our girls simply dug in and executed perfectly. They never gave up. They pressed towards the mark and it is such a blessings to see.”

The Veritas senior trio of Charlotte Milanesi, Mackenzie Meyers and Anna Torppey finish their high school careers with an impressive stat line of being undefeated in league play and winning 17 of the 19 tournaments they played in over the course of their 4 years.

Winning a national tournament is impressive for any high school team, but is especially unique for a school like Veritas Christian Academy whose enrollment is currently fewer than 50 students in the high school. Despite their size, Veritas has built a consistent reputation as a basketball powerhouse in Northwest New Jersey for both their boys and girls basketball teams.

The Veritas boys basketball team also played in the championship game for their division at the NCSAA national tournament but came up just short, finishing in 2nd place for the second straight year.