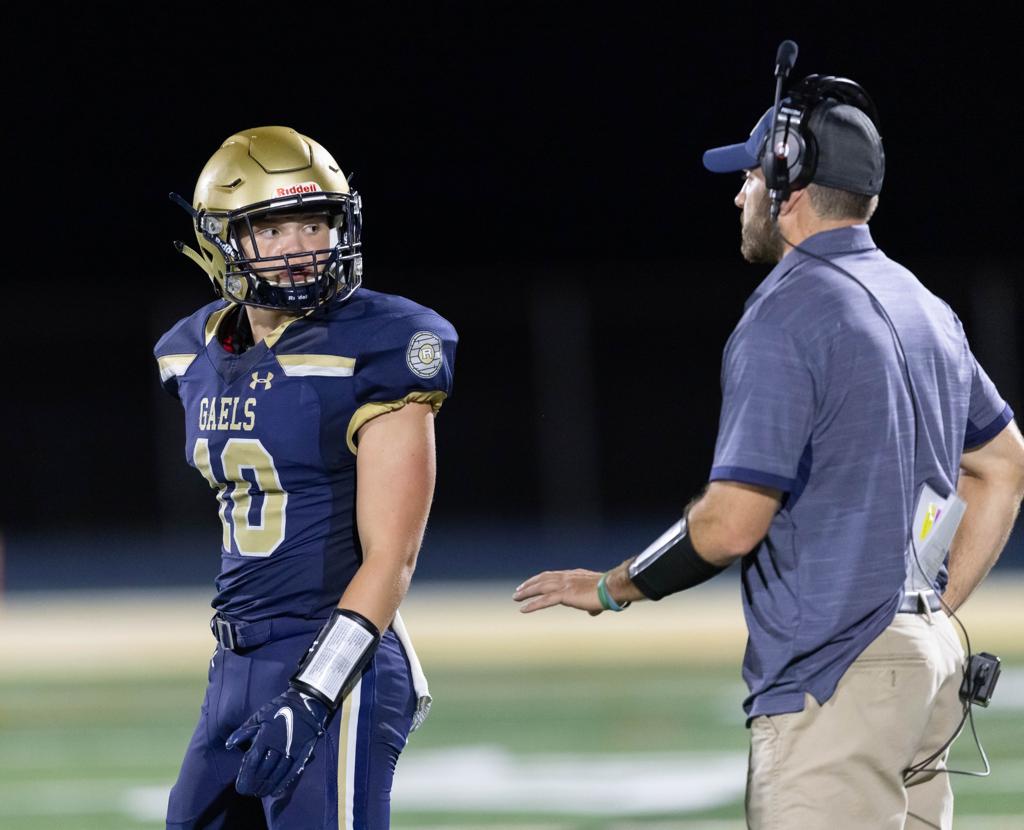 When legendary Roxbury football coach Cosmo Lorusso stepped down this winter, Ryan Roumes knew in his heart that he was the man to lead the Gaels.

And why not? He starred for Roxbury. He was an assistant coach under Lorusso for five years.

When he was young, he grew up literally hearing the referee's whistles from the school field in his backyard

Turns out, Roumes was correct: There is no better fit to replace Lorusso.

"I told myself there is no one better to do this," he said. "The love I have for the town kept me pushing for it. I always thought to myself since I applied, 'This is my job.'  And now, with the community, coaching staff and players, we want to get back to where we have been."

Roumes' infectious enthusiasm came into play when he interviewed. It comes out when he coaches and whoever he deals with -- like in his job interview for the position.

He has been the girls varsity basketball coach for the last two years, but what he did one day filling in for the freshman coach endeared him to Roxbury Athletic Director Stu Mason.

"We were playing an opponent with more talent, but to see how he coached the freshmen girls right down to the final buzzer like it was the Morris County final," Mason said. "That is how he is, all in."

Roumes instantly won a lot of people over during the interview process.

"From the start of the interview, he cannot sit down," Mason said. "He always needs to be moving, talking, explaining, teaching."
That is the Roumes way and the hope is that he can get Roxbury back into contention.

"I really only have one way of operating," Roumes said. "I have an energy and passion for the town and sports. It's not fake, it's just who I am. If I have to coach a game like that freshman girls basketball game, that is an opportunity for me to make someone better. That time with the freshman level was not to stoop down a level. It was fun. The girls played well and we had fun. I'm loud and passionate, regardless of whether it's fifth-grade grammar school game or a buck sweep on a football Friday night, you'll get a loud passionate person."

Lorusso believes that is another reason Roumes was hired.

"The biggest thing is energy and enthusiasm," Lorusso said. "He is a high-octane, energetic, young guy that the players gravitate to and love. He'll bring kids to another level because of the relationships he has built with them."

Roumes is relatable to the players for another reason. He was a star player who excelled on the biggest stage imaginable -- a state final. It isn't often that someone can say they pulled off one of the biggest plays in a school's illustrious football history.
Roumes can -- and did.

Roumes strip-sacked the East Orange quarterback and recovered the fumble near the Roxbury goal line and the Gaels hung on for a 14-6 victory to win the 2009 Section 1, Group IV championship at Giants Stadium.

"One of the most important plays in Roxbury history, certainly," Lorusso said. "It was his time. It was exactly what we needed at that time to help preserve the victory. He was a junior on that team and it was a talented team and he was certainly one of the talented players who made big plays all the time. It just showed a great awareness of the situation and the game and what was needed at the time."

Roumes went on to play for Marist College and returned to Roxbury as an assistant to Lorusso. Along the way, he has also coached girls basketball and baseball as an assistant.

Roumes built relationships with the coaches he had at Roxbury, from Lorusso to Jon Deeb in basketball to Greg Trotter in baseball.

"Awesome coaches," Roumes said. "It doesn't get any better than those guys. They won a lot and they are the reason why I'm back. They impacted me and now I hope I can impact kids the same way."

The Gaels have struggled the last few years, going 10-25 over the last four years, including 4-6 last year. Their last winning season was 8-2 in 2015.

Roumes hopes to bring the Gaels back to contention in the NJSFC Liberty Red.

Mason believes Roumes can do it. So does Lorusso.

"What impresses me the most as a coach is he embraces the pride and tradition of Roxbury," Mason said. "He has a good vision for what he will be bring in the future. He is aware of all of the pride and tradition and greats of the past but has an eye for what football look like in the future. He has a plan for the next 100 years of Roxbury football.

"The game is gonna look a little different. Roxbury kids have a reputation of being tough kids with grit, and he'll embrace that. It'll look a lot different on the field. He is high passionate and high energy with everything he does, especially football. You cannot talk to him and NOT get excited about Roxbury football."

Roumes has had that same passion for the Gaels ever since he was a ball boy and water boy on Lorusso's sideline.  For as long as Roumes can remember, he has been close to the program.

When he was a kid, Roumes would hear the Roxbury High School band during the Gaels games from his backyard.  He'd hear the announcer from the press box. He'd hear the roar of the crowd.

Roumes would soon draw even closer to the action.

Now, he is as close as one can get and he cannot wait to get started.

"It's a little nerve-racking," Roumes said. "I have big shoes to fill. Coach wished me good luck and to have fun, be myself and I'll do great things. He always put me in the right spot to succeed and told me to not be someone that I'm not."

Lorusso, meanwhile, felt it was time to step down. He finished his career as the Gaels all-time winningest coach, going 116-87 with two sectional titles (2009 and 2012), four conference championships and 15 winning seasons. His career record at Sussex Tech, Pequannock and Roxbury was 167-120.

The Gaels struggled recently with one victory two years ago. Lorusso guided the team to a 4-6 record in 2021 and the program has a strong nucleus of juniors returning for next year.

Nevertheless, when the 2021 season ended, he began to wonder if this was the time to step down. The decision came with the Gaels program coming first.

"We made big improvements from the previous season," Lorusso said. "The program is moving in the right direction and it sets up well for someone to have some success when he comes in."

For the first time since 2001, that won't be Cosmo Lorusso.

"When the season was over, I had some thoughts," he said. "I thought, 'You know what, maybe my time is done here.' I don't know if I have the energy, whatever it was I needed to bring the program all the way back to where it needed to be."

He didn't want to jump the gun and leave before his time, so he allowed himself more weeks to ponder the matter after the season ended. Then, when Ramapo coach Drew Gibbs died suddenly at 59 (the same age as Lorusso) late in the season, Lorusso reflected further.

Then he knew it was time.

"Did Drew do everything in life that he set out to do?" Lorusso asked.

So over Christmas vacation, he talked it over with his wife, Cathy, over long walks.

Roumes is one of three new coaches in the area.

The others are Casey Flynn at Morristown, and Mike Arakelian at Hackettstown.