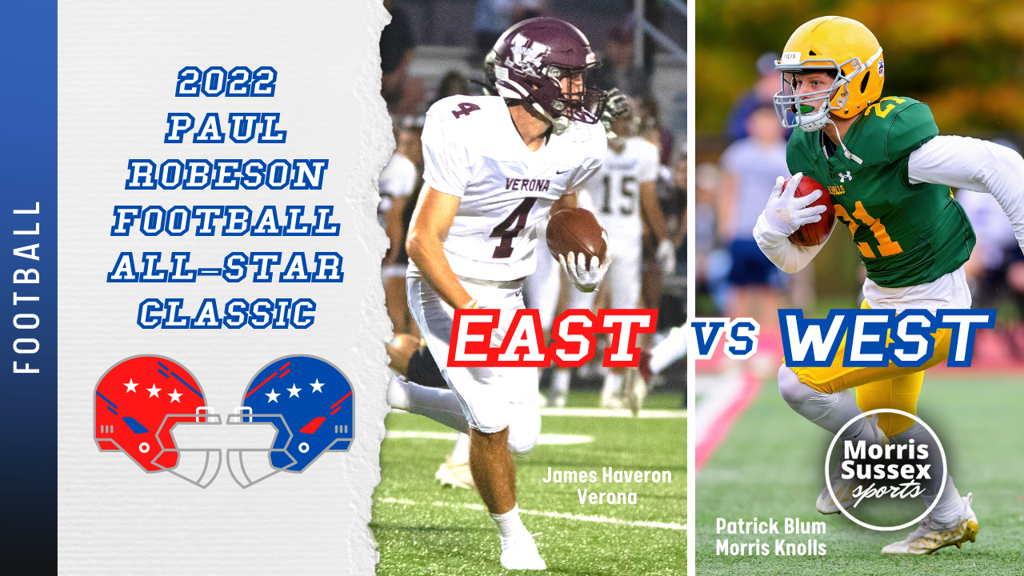 Will Nahan is entering his fifth year as the coach of the Randolph High School football program, for many years, one of Morris County's most prosperous.

The Rams coach has been handed the reins of the West team, which will face the East in the Robeson Football Classic in East Orange on Thursday.

The game hasn't been played the last two summers due to COVID, but the talent has made it worth the wait.

Nahan has never been dealt a hand quite like this one.

Everywhere he turns, there is an immense level of talent.

Randolph has had some athletic ability over the years but nothing like this.

The West completed three practices last week, but it didn't take long for Nahan to see what he and his staff had to work with -- on and off the field.

"The kids are awesome," he said. "They not only are good football players, but they love football. That's why play they chose to play one more game before college. They all love it. That is what they have in common, the coaching staff as well. Coaching-wise, this is great."

It isn't easy building football cohesiveness in a limited time of practice, but Nahan has the pieces to put things together. He coached in the game in 2016 when former Randolph coach Tarig Holman guided the West team.

The West team consists of players from Morris, Sussex, and Passaic counties. The East is made up of Essex and Hudson counties.

"The kids are coming together," Nahan said. "It is difficult building the team in a short period of time. It's very difficult. The kids have been great, but installing an offense, defense and special teams in a limited time isn't easy because of senior events like the senior prom and graduation. But with the personnel we have, we'll put in things that are effective because they are tremendous athletes."

The West is loaded with talent in the backfield led by running back Amir Smith (Eastside), who is "extremely fast, big, and tough and has looked great," according to Nahan. "Smith's speed is game changing. If he gets into the open field, not many people can catch him."

Others in the backfield will include Wayne Hills' Ben Contella and Morristown-Beard's Xavion Crosby, who will also see time at fullback and on special teams.

"It's a good problem to have when you a ton of talent," Nahan said. "We'll put kids in certain spots and highlight their strengths. We have a solid group of six wide receivers, so we'll go with four-wide receiver sets. We want to put points up. We have talented wide receivers and Joe has a big arm, so we want to highlight his talent."

"The talent is amazing," said Morris Knolls' defensive back Pat Blum, who will play at The College of New Jersey in the fall.  "It's really cool competing against talent like this, it's something I didn't see much of (at Knolls). Jair Stewart of Eastside and I have been working one on one and it's great to see that speed and explosiveness every time to see how I stack up against it. We have our battles. He catches some, I deflect some, but it is always a battle. It's a great opportunity for me. I know my level of skill and I'm as good as they are."

"The competition is one step above Knolls," Joey Dellemonache, Blum's Knolls teammate, added. "There are a lot of great kids and athletes. You could see the pace of practice is one step ahead. It's great playing with kids like that. I enjoy seeing how they play and how they compete."

The West O-Line is solid and meshing well, according to Nahan. They include Kyle Shermerhorn (Morris Catholic), Donato Cilenti (Randolph), Vaughn Burnell (High Point), and Melvin Rodriguez (Mt. Olive), among others.

"Shermerhorn is big and physical and pass blocks," Nahan said. "He loves to run block and loves the offensive line. He'll be a great asset in this game. Some kids in a game like this want to play just defense. He showed up and wants to just play offensive line."

As is often the case, the O-Line has helped to bring the team together in the brief time the group has been together.

"I always think the O-Line group is the funniest and this bunch is no exception," Nahan said. "They crack jokes and get guys together. The banter of the O-Line and D-Line makes it competitive. They want to represent the West. The game wasn't played the last two years, so they want to make a name for themselves."

All-star games usually employ rules such as a 4-3 defense and no blitzing, so Nahan is hoping the defense can perform well using a straight-up defense.

The leaders up front will be Mel Aboud (Newton), who will walk on at Delaware, and Marquay Cobb of Eastside.

"Aboud and Cobb can control the game and can play anywhere on the line," Nahan said.

Another one to watch up front is Chris Tortola of Butler.

The linebacking unit will have a distinct Morris County look with the likes of Randolph's tandem of Jordan Cross and Ryan Swayze and Dellemonache.

Blum is one of the key defensive backs and will be joined by Darrell Mims (Newton), Jason Roskam (Randolph) and Sammy Rivera (Eastside).

"Coach Parzero simplified things on defense, so they can go play fast," Nahan said. "They all tackle and hit, but Parzero and Magazine have done a great job with the defense."