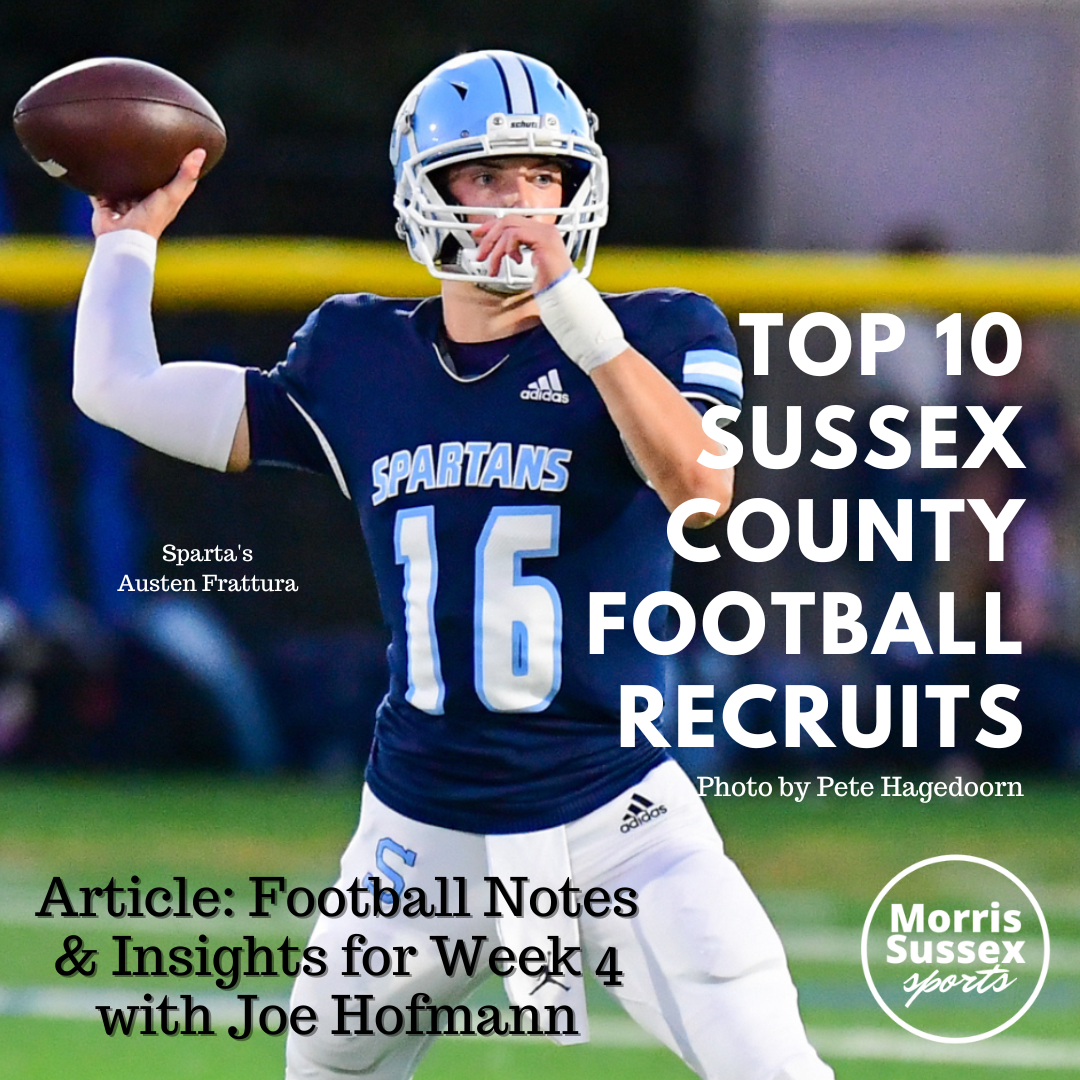 If it seems as though Austen Frattura has been quarterbacking Sparta forever ... well, he has been.

In a football sense, anyway.

They are incredibly rare.

So now you know what kind of player Frattura was when he arrived at Sparta -- and he has lived up to his reputation.

Holy Cross knows all about him, which is why they were quick to recruit him. Frattura has given the school a verbal commitment.

Dave McCarthy, a New Jersey high school football recruiting guru and the author of the highly regarded McCarthy Report, knows of him as well.

McCarthy has the 6-1, 205-pound Frattura ranked as the No. 1 recruit in all of Sussex County.

McCarthy ranks the players on recruit-ability and college project-ability, not how they perform as players right now.

Frattura is making an impact on the high school level and McCarthy believes the senior is capable of being impactful on the next level.

"He is a precision, rhythm passer who sees the whole field, has a great grasp of the offense and has impressive arm strength for his size," McCarthy said. "He is good with his pre-snap reads and makes smart decisions with the ball. He can sling the ball into tight windows."

McCarthy's recruiting service, The McCarthy Report, has been used by hundreds of colleges all across the U.S. as a recruiting tool for many years.

Line is a 6-foot, 225-pounder who "is a very versatile ballplayer who can play inside or outside linebacker and Pope John lines him up all over the defense," McCarthy said of the Harvard commit. "He flies to the ball and arrives with force. He is physical and can run. He is also a super smart young man who is a heady defender who has a legit nose for the football."

Peterson is a 6-2, 275-pounder who "is a right offensive tackle and defensive tackle who has good feet and can move for 275 pounds," McCarthy said. "He is strong and agile. He does an especially good job pass blocking and can keep his man in front of him. He gets downfield well in the run game and will hit defenders in the open field. He has a good first step off the snap on defense and locates the ball carrier well."

"Gage has quick feet, good speed and outstanding run vision," McCarthy said. "He has made a lot of big plays for Vernon the past few years. He averaged 7.1 per carry in 2021 with 1,189 yards rushing and he has a nose for the end zone (16 TDs)."

"Chase (6-2, 215) is a dynamic athlete who can move and plays outside backer and wideout at 215 pounds," McCarthy said. "At wideout, he has the speed to get deep and on defense is particularly a strong open-field tackler and can make plays in space."

"Dylan is an athlete at QB," McCarthy said. "He throws a particularly accurate deep ball and has the speed and running ability to give defensive coordinators headaches."

"Justin is a playmaker at safety who fills the alley quickly and also is strong in coverage," McCarthy said.

The 6-1, 230-pound linebacker is "an instinctive inside backer who does a good job of avoiding blockers and making plays," according to McCarthy.

The 5-9, 190-pounder is a "Low-slung, rocked-up backer and running back who has great instincts on both sides of the ball and is as tough as they come," McCarthy said.

The 5-10, 165-pound McCullough is terrific as a specialist and is running the Braves Wing-T.

Others To watch from Sussex:

Athletes are welcome to send game tapes to:

We are through Week 4 of the high school football season, which means it is time to check in on the divisional races involving Morris and Sussex County schools.

Next week, we'll examine how the sectional races are shaping up.

The favorite: Three teams have stood out thus far and it is not easy separating those three. Knolls, Randolph, and West Morris are arguably the three best public schools in Morris County. We might be looking at a three-way tie for the league title. They are definitely a cut above Morristown, Roxbury and Mount Olive.

What has happened so far: Perhaps the biggest eye-opening result of the division thus far was Morristown beating Mount Olive, 22-14. Kudos to rookie Colonials coach Casey Flynn. The big games are in the coming weeks.

The favorite: I'd put my money on Parsippany Hills, whose 48-14 victory over Montville would seem to indicate that the Vikings are the best team in the league. While the Liberty White is top heavy with three teams a cut above the other three, there were four teams that appeared to be close in the early going (Chatham, Par Hills, Montville, and Warren Hills), but then Par Hills rose up with its stunning easy victory. As an aside, Mendham has been very competitive in losses to West Morris, Montville and Warren Hills.

What has happened so far: Chatham squeezed past Warren Hills (21-20). Warren Hills squeaked past Mendham (21-20). Montville played West Morris very tough before losing (21-7) but then was pushed all over the field by Par Hills.

What has happened so far: Have any schools gone through a gauntlet the way Delbarton and DePaul have? The Green Wave have lost to Seton Hall Prep (32-27), Bergen Catholic (21-6) and St. Peter's Prep (32-7) to start the season 0-3. DePaul, meanwhile, lost to St. Joseph's-Montville (36-31) and is in the same boat as Delbarton. These are probably the best 0-3 teams in the state and worthy of Top 20 consideration.

The favorite: Surprising Hackettstown and powerhouse Newton have emerged as the two best teams. Hackettstown is doing an amazing job and stunning a lot of people this year, but I'd make Newton the favorite. Always go with the established program over the up-and-coming one in high school football.

What has happened so far: Hackettstown shocked a whole lot of people with its 32-7 victory over Lenape. Newton dominated Wallkill Valley (35-7).

The favorite: No one is the favorite because the league is very balanced. North Warren, Pequannock, Boonton and Parsippany appear to be the four best teams in the league right now. I'll go on record as saying there is no way one single team wins the league. Two or three will probably tie because there might not be a team good enough to sweep everyone.

What has happened so far: Big results of note include North Warren knocking off Parsippany (14-13) and Pequannock beating Boonton, 28-27.

The favorite: Caldwell won a Group II Regional championship last year, going undefeated in the process. The Chiefs might be on their way to another undefeated year and is a definite Top 20 club, which is very rare for a Group II. Mountain Lakes is the best of the rest. Madison has had a nice comeback year.

What has happened so far: Caldwell has beaten Morris Catholic, Pequannock and Verona by a combined score of 137-34. Mountain Lakes, which entertains Hanover Friday night, is good but not on Caldwell's level. If the Herd want to win the league, they have to go through Caldwell.

What has happened so far: Butler has had a nice comeback season from a sub-.500 year. The Bulldogs had a two-touchdown lead on Park Ridge on Opening Night but then lost a 26-21 decision. Butler then went on the road and surprised perennial powerhouse Hasbrouck Heights (28-21). Wood-Ridge doesn't have much of a football history but the Bergen County school is off to a 3-0 start in the league.

The favorite: I'd go with Pascack Hills, which has convincing wins over Teaneck (27-7) and Fair Lawn (41-13). There aren't really many clues yet to figure out who the best team is.

What has happened so far: Dover is off to a 2-1 start after having beaten Hopatcong last week, 35-0. Bergen Tech has a 9-7 win over Dover. Teaneck has a 26-8 win over Indian Hills.