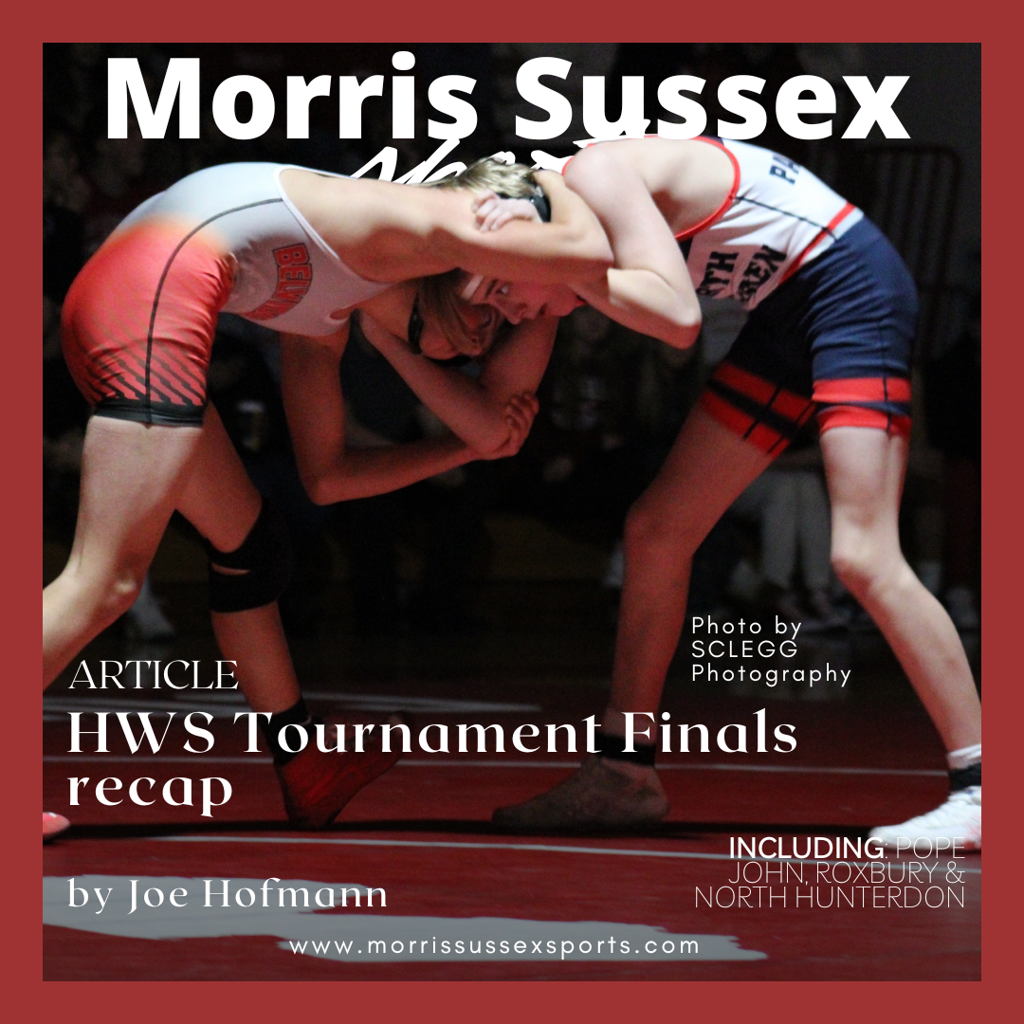 When the curtain came down on the Hunterdon-Warren-Sussex Tournament last year, Pope John's Jason Athey was one and done and ... invisible.

He lost his opening match, didn't place, and barely made a dent.

This time, he wanted to make an impact.

Consider it made -- with an exclamation point.

"It felt great watching everyone win, guys I practice with in the room every day," Athey said. "It shows that the work is paying off on the mat."

"On paper, (Athey and Holly) were unexpected but they work hard," Walsh said. "I see these guys in the room every day. They are tough, right up there with the best guys in the state. I see them get their hands raised and it fires me up and helps me to wrestle better."

Athey knocked off High Point's top-seeded Nick Clayton in the semifinals, 2-1. In the quarters, he tecked North Warren's Thomas Dugan, 17-2 (4:54).

It was a far cry from last year for Athey.

"Jason is definitely motivated," Pope John coach Mark Piotrowsky said. "It's his senior year. One of the things he has worked on is that last year, he'd put himself in bad positions. He'd take kids down and put himself in a bad position. This year, he hasn't done that. He has become much smarter. He knows his strengths. He studies opponents. If a kid is good on top, he'll go neutral. He has become a smart wrestler."

That all comes from being a senior. It was Athey's last chance to make his mark.

"It's a pretty big deal," he said. "Last year I didn't place. I wanted to make a statement and get some big wins. I'm in the room with Carson Walsh and Jack Nauta every day and that helped me improve on my wrestling."

Athey believes this will give him the boost he needs for the postseason.

"I'll boost my confidence a lot," he said. "Getting this under my belt ... I really wanted it. I went in like another tournament. I wanted to win it. I went in with a winning mentality. I just wanted to let it fly, just another day on the mat."

Walsh, meanwhile, showed why he is one of the state's best 126-pounders.

He recorded three teck falls, including a 20-5 victory over Delaware Valley's Jaden Perez (2:43) in the finals.

"Carson's technique is so sound," Piotrowsky said. "He puts the time into developing his technique. He'll go back and watch all those matches. He teck falled people, but he will go and try and correct his mistakes to get better. He is a real student of the sport."

Everything is falling into place for Carson, who just might be on a collision course with Roxbury's Luke Stanich for the state championship.

"We are having a great year as a team," Walsh said. "Everyone is working hard. I just went out and scored points, which is what I like to do. Me, my coaches ... everyone is expecting big things. I expected to win and dominate and that is what I did.

"Getting to the state tournament is always in the back of your mind," he said. "I've just got to keep my head down and once that time comes I'll be ready, that's for sure."

Holly beat Delaware Valley's Owen Kucharski in the semifinals, 3-2, and then upended Warren Hills' fourth-seeded Augie Szamreta in the finals, 10-4. Holly, outstanding on the mat, was taken down in the first period but battled back with a reversal and two sets of back points with cradles to pull away in the final.

In the semis, Holly allowed a takedown to Kucharski but fought back.

"He's put a lot of time in in the offseason," Piotrowsky said. "He was definitely undersized last year. He is not a big 106-pounder but has gotten a lot better. His confidence has grown. He has put a lot more time in in the room. We have some really good workout partners for him. They have raised the intensity in the room. He is a great drill partner and has gotten extremely good on top."

Holly knew winning the brutal weight class would be difficult.

"I saw the bracket and I knew it'll be tough but I went in with confidence that I could win it even though there was tough kids," he said. "The final was tough. He was the four seed and he upset the one seed (Hunterdon Central's Peter Plesh, 8-6). I went in there with mentality that I'd turn him and I did.

"I have been riding legs since I was little. My teammates push me every day to be better."

Winning HWS has given Holly confidence that he didn't have entering the weekend.

"There are wrestlers I'll come after now," he said. "We have a tough schedule ahead and I want to move up the rankings. It's time to show people I mean business and I can place in the states."

At 113, Dalton Webber beat Hackettstown's returning state qualifier Aiden Scheeringa in the match for third, 5-2. Webber gave North Hunterdon's state contender Logan Wadle a go in the semifinals before losing, 6-4.Wadle reversed Webber in the closing seconds to pull out the victory. Webber placed seventh at the season-opening Beast of the East and is making an impact this year.

"Dalton has come on," Piotrowsky said. "He has wrestled and beaten some good kids. He almost took him to OT. He was at a point in the match where he should have gotten back points. Wadle is an extremely good wrestler. Dalton came back strong against Hackettstown and took third."

Nauta (132), meanwhile, lost in the match for third to Warren Hills' Josh Lee, 9-2. Nauta gave eventual champion and state contender Gavin Hawk of Phillipsburg a good match before losing, 5-2. Hawk went on to major Hackettstown's Nicolas Balella in the finals, 12-3.

"Jack lost to Hawk, 5-2, but it was really 3-2," Piotrowsky said. "He pushed it and gave up a late takedown. Jack has come on strong. He is a leader in the room. In dual meets, he is a pinner. He is wrestling smart. Last year, he wrestled up a weight. This year, he is at the right weight."

Justin Holly (138), a returning HWS champion, took fourth after sustaining an injury. Holly, seeded second, lost in the semifinals to Warren Hills' Shawn Redfield by a fall in 5:08 and then forfeited in the third-place match to Newton's Michael Melillo.

"Justin Holly made the semis but couldn't go on," Piotrowsky said. "He was injured early in the year and this was his first tournament back. He may have come back too early. He is talking to the doctors. He is a leader in the room. He is a junior but a great role model who works extremely hard."

Pope John 215-pounder Cardin Madry placed fourth after losing in the third-place bout to Vernon's Jack Mosier, 11-8. Madry lost in the semifinals to Warren Hills' Jarett Pantuso by fall in 1:33.

"Cardin has solidified our upper weights and he has had some good wins," Piotrowsky said. "His record (10-6) might not reflect how good he is. We weigh in two kids at 215 and he gets the better of the two. He goes out and takes care of business."