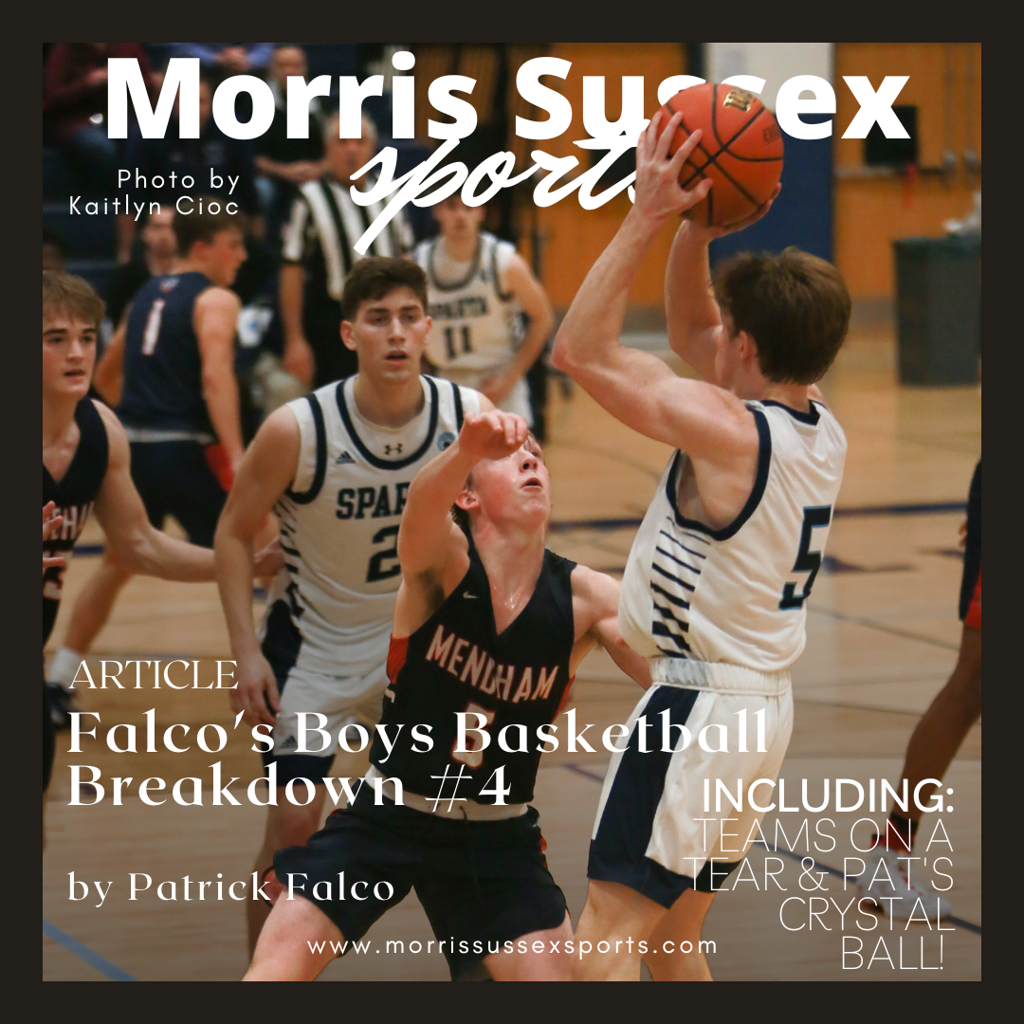 This week we have some exciting games to put in the spotlight. I know many of you like scoring but occasionally, an eye-catching defensive battle can pull you right in. That’s exactly what we have for you this week. We give you an inside look into how the top teams are doing. HINT (They have been dominating as usual)

Mendham and Sparta both played a tough smothering defense for much of the contest. As a result, a plethora of turnovers were committed.

With both offenses struggling to get anything going through 3 quarters, the Minutemen coaching staff decided to make some changes. A big adjustment that Mendham made in the 4th quarter was getting Senior forward Mike Ewing more involved. He is the tallest guy on their roster at 6-6”. Ewing used that size to bully his way in the paint and knock down some clutch free throws after he got hacked. Mike made six free throw attempts down the stretch that helped seal the deal for Mendham. Ewing finished with 14 points as the Minutemen earned a hard fought win against a solid Sparta team 40-28.

The win vaulted Mendham into a tie with Sparta in the American Division. Both teams own a 9-5 overall record with Sparta slightly ahead in the conference records.

Teams on a tear:

The West Morris Wolfpack look like they have the potential to be a formidable number 1 seed going into this year’s playoffs next month. The Wolfpack boast 7 seniors and 4 juniors on their roster. Having this type of experience will certainly benefit them as they start their quest for a deep run in the NJAC playoffs. With the style of physicality and toughness that they bring, it will be a challenge for anyone to push them to their limits. West Morris has won 10 of their past 11 games and sit atop the Conference with a 14-2 overall record.

I would like to highlight the Chatham Cougars as my next team that deserves the spotlight. Chatham is another team that can do some real damage once the playoffs come rolling around. The Cougars own a stellar 9-1 record in the Conference. Like West Morris, Chatham has dominated 10 of its past 11 contests on the way to a 11-2 overall record. Once tournament time comes you will not want to face these Cougars led by Senior forward, Ryan Leskauskas. Leskauskas has knocked down 29 threes. What a sharpshooter!

The Lenape Valley Patriots have had a surprisingly solid start to the season. The Patriots currently sit in 3rd place in the Freedom Division with a 7-6 overall record. This upstart team can still make up some ground with a good portion of the season left to play. If the teams ahead of them slip up down the stretch, the Patriots would be there to capitalize on their misfortune.

The Independence Division looks like its going to be a two horse race for the top spot towards the end of the regular season. Kinnelon is leading by two games over Boonton.

Do not count out these Boonton Bombers. The Bombers have some lethal 3 point shooters and guys that can make you pay from the stripe. Watching this race is going to be fun.

Lets take a closer look at this year’s Madison Dodgers. The Dodgers have a well experienced team with seven seniors and six juniors. Junior Guard Jackson Maloney has been shooting lights out from beyond the arc with 32 three pointers! Madison has piled up a substantial amount of wins so far with nine. This team can make some noise in this division as they own an impressive Conference record at 6-3. Madison is just percentage points behind Morris Catholic who sits in 1st place.

West Morris’s Senior Eli Stoute is averaging 12 points per game and has drained 51 free throws while picking up 71 rebounds.

Mendham’s Senior forward Luca Cresti is averaging 12 points per game and has knocked down 28 free throws.

Madison’s Junior guard Jackson Maloney is averaging 13 points per game and has picked up 49 rebounds.

Lastly, Boonton’s Junior G/F Charlie Hurd is averaging an astounding 19.6 points per game and has been money from the free throw stripe. He has made 70 free throws and has been giving up the body for a whopping 165 rebounds!